"Water enters the garden by a chevron-patterned chadar in the northern gate [hammam]. A large tank behind this gate, now filled from a drilled well, was originally filled from the Jumna [Yamuna River]. The river's course has changed, and it is now some distance from the garden."1

"The restoration of the garden and its hydraulic infrastructure were completed in 2003 by the collaborative efforts of the Archaeological Survey of India and the Aga Khan Trust for Culture under the aegis of the National Culture Fund."2

"Three wells that had been completely filled in and covered over were discovered during the course of the works. Two wells four metres in diameter were found in the sunken area to the east and these were desilted to a depth of 15 metres. They now hold about six metres of standing water. Another well was discovered in the southwest quadrant after an excavation was carried out in its locale."3

Click on the images to display them in full size.

Water is supplied to Humayun's Garden Tomb by wells.

This chadar transports water from a well behind the garden wall into a tank and forces water out of the tank and into the water channels.

Water is supplied to part of the garden from a large well behind the hammam. The water from this well is introduced to the garden by the large chadar in front of the hammam.

A formal bibliography is posted on the outline page. 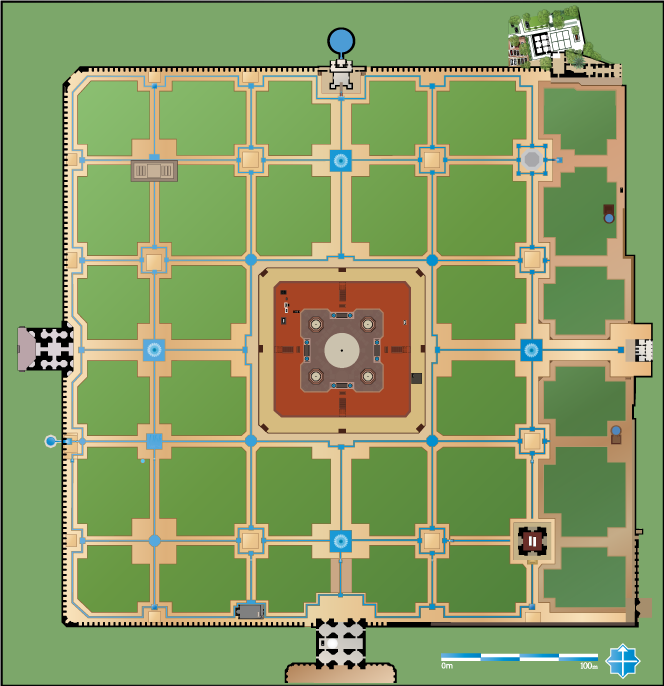